People often think they can’t change their past, but I disagree. Perhaps we can’t change every mistake in our past, but we have to remember that the past is a moving target. Every day that goes by us becomes a part of our past history. Whatever we do today will become a part of our past tomorrow, which means we do have the power to change our past by doing the right things today.
This lesson is taught best in the Disney movie “The Lion King.” There is a point in the movie when the young lion Simba is feeling sorry for himself for his past mistakes. The wise baboon Rafiki takes a stick  and hits Simba on the back of the head. Simba yells, “Geez, what was that for” and Rafiki replies, “It doesn’t matter, it’s in the past.” Simba says, “Yeah, but it still hurts.” Rafiki then says “Oh yes, the past can hurt. But the way I see it, you can either learn from it, or run from it.” Rafiki then swings the stick again to hit Simba on the head and Simba ducks down in time to avoid the stick. Rafiki says, “You see.”  I love that example! It’s the perfect reminder that this principle should not be a difficult one for us to grasp. Yes, it hurts to mess up, but it’s in the past, so learn from it and move on.

It explains why despite deciding you’ll hate a movie ten minutes in, you’ll stick it out for the whole two hours in misery. You’ve already paid for the ticket, so you don’t want to waste money by not seeing the movie. But you won’t get that money back if you stay, so why do you feel like you have to? The reason we’re inclined to throw good money after bad (which economists call the sunk cost fallacy) is a perfect example of loss aversion in action. If we’ve spent resources on something—whether it’s as small as a ticket to a bad movie or as large as the billions of dollars spent in a war or social program that’s not working out—we’re inclined to stay the course so as not to waste what we’ve already spent. In other words, we want to avoid feeling the loss of what’s been spent, so we stick with our plan, hoping for a gain, even when sometimes that just leads to a bigger loss in the long run.

Similarly, in investment products many times how it is beneficial by correcting mistakes.

Mr. Swami is dynamic Software engineer, at the age of 30, he decided to save for his Retirement Goal AND TAKEN Traditional Endowment Insurance Plan for 20 years premium paying term with 1 Lakh Annual Premium.

Mr. Swami was upset after seen 5 year returns of only 6.5% p.a.(CAGR) , Now, today at the age of 35 when he got his Financial Health Checkup done from an Advisor.

Advisor recommended him below “CHANGE”: 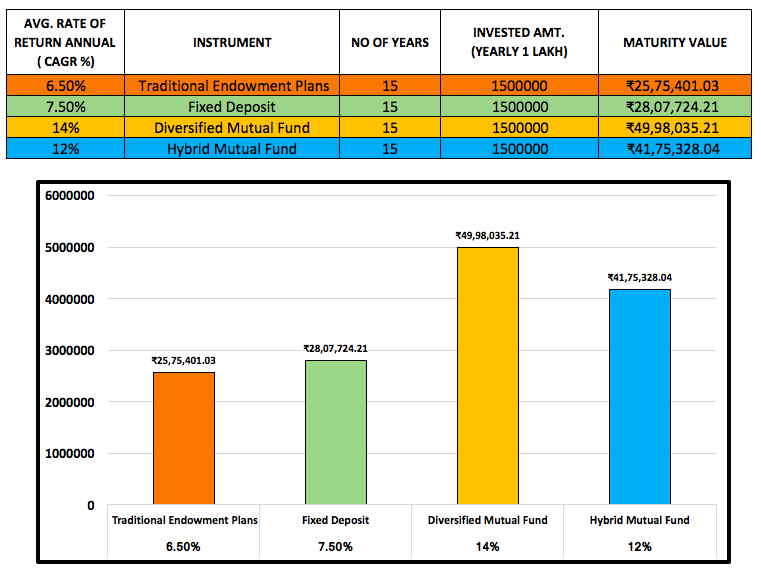 ** Note: Above calculation is considered without taxation.

What have you done if you are at the place of Mr. Swami ?

There is no question that making mistakes is a necessary part of our growing process, but I do believe there is a way we can still learn and grow without making quite so many mistakes and in a way that can be far less painful. And when you do make your next mistake, which all of us most certainly will – own it, fix it, and for heaven’s sake when that stick comes swinging toward the back of your head, hopefully you have learned enough to duck like Simba !!